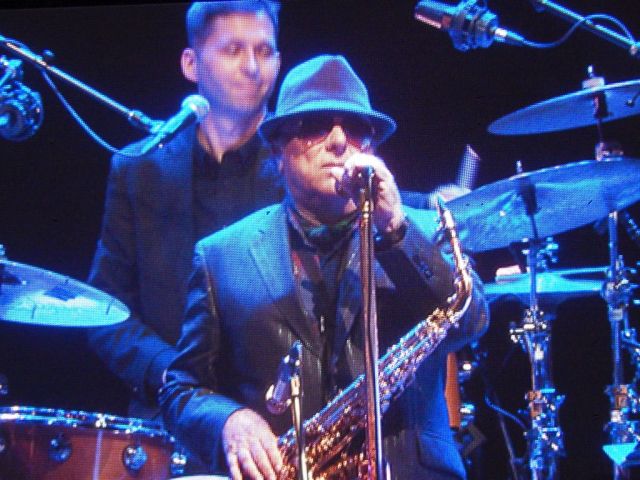 The only other time I saw Van Morrison in concert was in 1974 at the Capitol Theater in Passaic, NJ, a mere 43 years before this Music City show. Back then, I sat in the front row for a set by Van and a band he called the Caledonia Express. When they returned to the stage that night for what I recall as a one-song encore, I hollered for “Moondance” to which Van replied “Yeah!” I think it was the only thing he said the entire evening.

On this warm late summer night in Nashville, the high ticket prices made me chose the lawn where I still had to fork over $81. And now bearing the title of “Sir,” Van Morrison really didn’t have much to say this night either. Other than welcoming his daughter Shana to the stage for a duet and introing his surprise playing of “Mechanical Bliss,” a strange obscure B-side to a 1977 single, we heard little from Van the Man between songs.

The outdoor Ascend show was scheduled as a part of Nashville’s Americana Festival, and the night before, Van was honored with a lifetime achievement award at the Ryman. He said nothing after receiving said award and followed it with a new song that required him to read the lyrics.

With Mr. Quiet also having a reputation as being a rather snarky old fellow, I was cautious about seeing Van. In my Nashville tenure, he has twice played the Ryman with ridiculous ticket prices making me pass. Also, the word on those shows was one of disappointment, since he stuck to new songs playing little that anyone cared to hear. However, tonight’s show remarkably proved to be quite a pleasant surprise.

With a solid band behind him for whom I unfortunately can’t provide a roster, Van’s singing was sublime. He did cleverly cheat a bit for which I give him much credit. After all, how many 72-year olds can still carry a note like they once could. Said cheating took the form of sharing some lead vocals, possibly out of his current range, with one of his two female backup singers. This also served to give his voice a little rest as did the extended instrumental breaks by the band. Smart stuff!

The song selection was a major shock. While he got all that grief for doing too many new songs at those Ryman shows, tonight, believe it or not, he did absolutely nothing from his brand-new album! He even threw in two country covers to silently acknowledge that he was in Nashville along with some of the faves we wanted to hear. For me, hearing “Jackie Wilson Said” was a life-long dream despite the slight disappointment that he toyed with an original arrangement so engrained in my brain. We also heard the two early Them classics, “Here Comes the Night” and the show-closer, “Gloria.” The instrumental close to the later after the singer left the stage was long enough for Van to be back in the hotel room before it ended!

I really have grown to love the lawn at Ascend. Even though it is far from the stage, the screens give you a good sense of the stage activity, and the sound is pristinely spectacular. However, the problem tonight with the lawn was one that I also understand happened in the high-dollar seats as well. Nashville was just not behaving like “the city that loves to listen.” The crowd was awful! Chatty and indifferent most of the evening, many seemed to be there for just “Moondance” and “Brown Eyed Girl” which had a lot of room between them, leaving time for a lot of impatience. Like I have said before, “classic rock audiences suck,” and this one was the pits.

One thing that this rude audience overlooked was a brilliant opening set by Van’s daughter Shana. This lady is a talented singer, and it would be great to see her pay a return visit to Music City at a smaller listening room. And Van, we’d love to see you here at the more intimate City Winery, but are afraid to even think what that would cost!

BAND:
Van Morrison—Vocals, Saxophone and Harmonica
[rest of band unknown at the time – see “comments” below for info]