In 1980, I left my home in New Jersey for a new life in Texas. Following my heart and leaving the exciting New York City music scene behind, I was surprised to learn that I had moved near another city that was a hotbed for some of the best music to come out of the 80s and 90s. That city was Austin and two of its best musical catalysts were Alejandro Escovedo and Joe Ely.

I first discovered Ely, a transplant to Austin from Lubbock who brought the musical spirit of Buddy Holly along with him. Ely had everything I looked for in an artist. He made great records, was a killer live performer and had a great band that made you love every player. I followed Joe and his barnstorming band in and around San Antonio and Austin, and it seemed like I was lucky enough to see them just about every other weekend. If there was ever another artist with the passion for live performance like my Jersey hero Bruce Springsteen, it was Joe Ely. He even toured with and was buds with The Clash!

Eventually, Ely started doing solo shows with just an acoustic guitar. The “unplugged” days were upon us, and many artists had started performing this intimate way. After seeing Joe play on his own a few times, I proudly proclaimed that there was no one better at it than my guy Joe. In my opinion, he was even better at it than Bruce. Ely’s voice back then, as it still is today, was as smooth as silk. Whether it is a gentle ballad or a rowdy rocker, Ely is simply a master at accompanying himself on an acoustic guitar. 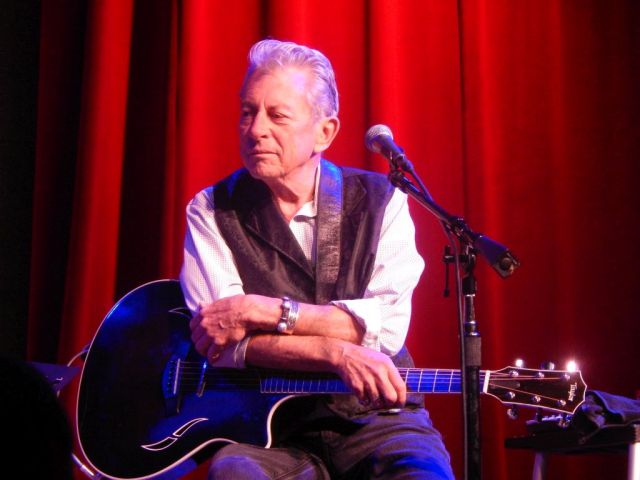 Alejandro Escovedo, who Is equally adept at solo performance, first got my attention when he was a member of my all-time favorite cow punk band, Rank and File. His supporting role in that band led to Al starting as many different band projects in Austin as he could think of. It was even hard to keep up him, but I saw him as often as I could and his amazing versatility would find him at his rockingest with the True Believers or Buick McKane, or the other end of the spectrum fronting a performance piece with a string quartet. He was truly the Renaissance musician of Austin.

Fast-forwarding to today, we find Ely (age 70) and Escovedo (age 66) as senior statesmen of Americana, touring together and trading songs on a joint-headlining acoustic show. (They brought this same show to the Franklin Theater in 2014.) In their promo for the show, the Nashville Scene blundered by labelling Alejandro as the headliner and Joe as his opening act. I’m sure that this would upset no one more than it would Al, since his relationship with Ely has been one of long mutual admiration.

Watching these two legends of Texas music perform, it was obvious how much they respect each other. While one sang and played, the other sat motionless watching the other as if he were just one of the fans in the full house at the Winery. It was only until later in the set when Al gave Joe a nod to do some guitar picking on one of his numbers that they played as a duo. The closing number, Ely’s twist on a Woody Guthrie song, “Going Down the Road Feelin’ Bad” was the only full number played as a duet which came before a final encore of one last song each.

While both are respected songwriters in their own right, as always, Ely took some support from his fellow Flatlander songwriters from Lubbock, Jimmie Dale Gilmore and Butch Hancock. On the other hand, Escovedo took a route outside Texas, covering Ian Hunter’s Mott the Hoople classic, “I Wish I Was Your Mother,” a song which over the years Alejandro has made many fans mistake it for his own.

It seems that the Winery stage is often filled with older gentlemen these days. While this can often be a hit or miss, Alejandro Escovedo and Joe Ely are two artists who still sound as fresh as they did 30 years ago. And both are still vital making and releasing new music. They are welcome back to Music City as often as they’d like—with their great bands or alone by themselves like they did tonight.