The first I heard of the Shawn Colin and Steve Earle collaboration was at one of Steve’s career-spanning solo shows during his January residency at Nashville’s City Winery. Closing with one of their newly co-written songs, “Tell Moses,” I found the news of this new musical partnership quite surprising.

I have been somewhat dismissive about Colvin’s career. To me, she was just a sensitive singer-songwriter who hit it big at the Grammies with a song (“Sunny Comes Home”) that I really didn’t like. (It was both Song and Record of the Year in 1998.) Some skepticism also later festered when I was disappointed with the way this new acoustic duo sounded on their April Record Store Day single release (“Wake Up Little Suzie” b/w “Baby’s in Black”). To my ears, it all sounded a little forced and harsh.

But, never wanting to miss a chance to see Steve, I jumped at the chance to be at the City Winery in New York City for their record release show. And now, not only can I say I was glad I went, but it turned out to perhaps be the most enjoyable show I have seen thus far this year.

Instantly, I was taken by how much I had misread Colvin. Rather than the soft and tender type I had typecast her, she actually is one tough, strong woman. Dang, she’s even got a tattoo on her wrist! If there was ever a female version of Steve Earle, she may be it. This musical partnership is a pairing of like souls.

These two both sing and play hard and each seems to not give a shit about anything that would interfere with whatever it is they wanted to do at the moment. This ain’t no sappy remake of Gram and Emmylou. Their voices seemed to meet at the perfect point in tandem with their smooth acoustic accompaniment. The cover songs sounded fun and full of frolic. The moments where only a lone voice was heard were rare—mostly in their own songs where the touches of added backing vocals nicely complimented these songs.

Their 90-minute set included the duo’s entire recorded repertoire: their six original co-writes and the six cover songs from the Colvin & Earle record, including the two bonus covers on the expanded edition. The balance of the set list was made up of four Steve songs and three of Shawn’s. Before ending the night with “Copperhead Road” (What, no “Guitar Town”?), Steve jokingly, but humbly, asked of Ms. Colvin, “You did Sunny, right?”

Of course no night with Steve Earle would be complete without some of his usual words of wisdom and storytelling. A new tale tonight for me was how in 1984 someone took him to see Springsteen in Middle Tennessee. Without a record deal and feeling uninspired, seeing the Boss sparked him go home that night and write “Guitar Town.” (P.S. Elvis Costello also tells how he wrote “Temptation” after seeing Bruce in Nashville in 1978.) 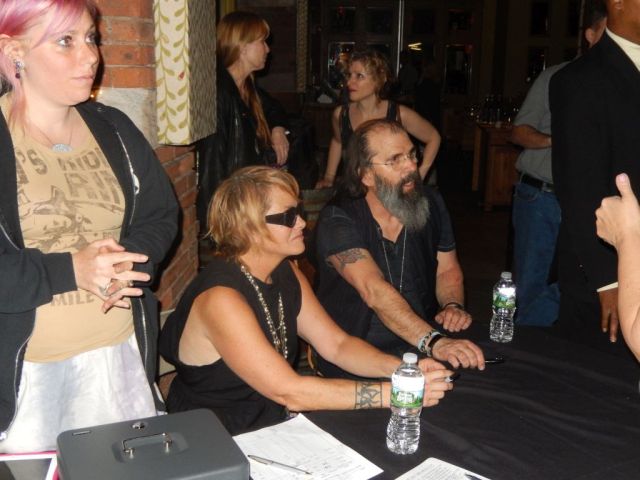 After the set, the two tattooed troubadours set up shop to scribble autographs for fans purchasing the new record. They would soon be off to England for a few shows and will be on an extended US tour later this year. I say see them if you can—you won’t be sorry that you did.

P.S. I’d be remiss to not mention the great opening set by Emily Duff. This New York-based singer songwriter is worthy of a listen.