Those who know me know of my frequent trips home to see my parents In New Jersey. In addition to the quality family time, the evenings usually offer me time to exploit the New York area for my two passions: pizza and music.

New York music plans start at www.pollstar.com, and this time the site lead me to the discovery of Hamilton Park House Concerts in Staten Island. Aside from the usual intimate experience offered by house concerts, I would also get to see two of my all-time favorite singer-songwriters in the same weekend: Jill Sobule Saturday night (7:30pm) and James Maddock Sunday afternoon (3:00pm).

After making e-mail contact with host Ray Heffernan, I knew he was a musical soulmate who would become a friend for life. Ray, who has an entertainment background with a small Staten Island venue, presents the Hamilton Park shows with his wife Maureen from their magnificent historic home on the North shore of the Island.

Meeting Ray and Maureen was as pleasant as I expected. I could have talked music with them my entire time there until I realized there were about 50 other folks looking to do the same thing! After chatting about the weekend artists and our common Springsteen obsession, I spent the remainder of my pre-show time visiting with other fans and touring the house. The residence is a sight to see in itself, let alone the vast assortment of rock and roll memorabilia throughout the place. 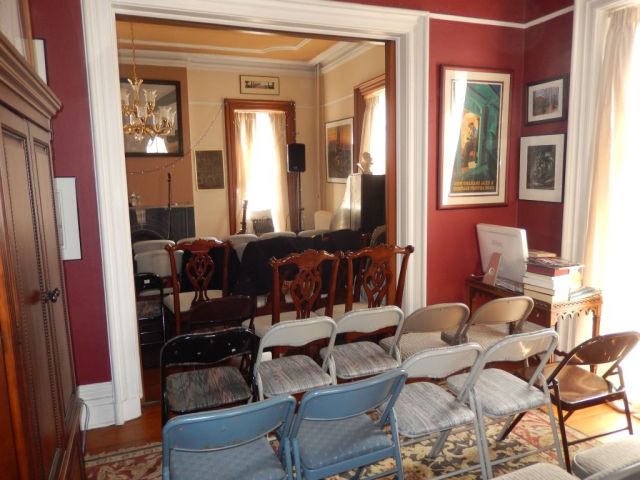 Like other house concerts, folks bring food to share in addition to treats provided by the host. I did make an early effort to place my coat on a choice seat for the shows. The music area consists of two adjoining rooms lined with chairs to accommodate the audience. There’s not a bad spot in the house.

Ray provides the nightly artist intro after a run through of the upcoming shows (see their Facebook page) and the simple house rules (phones off and talking to a minimum). What then followed were commanding performances by two artists who both lack the propensity to give a bad one.

Current Californian, Jill Sobule, gave an engaging up-close and personal 90-minute set to a packed room of many who were unfamiliar with her work. (I spoke to several folks who simply follow Ray’s recommendations.)  This didn’t matter since she soon had us all hanging on every word. She and I soon bonded through my honored request (“Rainy Day Parade”) and for the rest of the show she knew she at least had my strong support—not that she needed it!

We got to hear her current politically-cynical song (“We Want Our America Back”) that has made her a sometimes fixture on the Bernie Sanders campaign trail. There were also killer covers of her old tour mate Warren Zevon’s “Don’t Let Us Get Sick” and Bowie’s “All the Young Dudes.” Before a show-closing requested “I Kissed a Girl,” she described it to be a mixed blessing with its novelty perhaps overshadowing its fame.

At show’s end, a house concert is a great place to “meet and greet” the artist. Yours truly then had a blast catching up with Jill who lived in Music City for two years just after the turn of the century.

Sunday afternoon, turned out to be an equally delightful experience with the brilliant James Maddock in fine solo form. The British-born artist, who now calls New York City home, gave a career-spanning 90-minute set focused on his more serious and sensitive numbers. However, somewhere in the middle he did his brilliant pop song “Chance” from his first LP.

The prolific songwriter connected well with the crowd who were quite enthusiastic in artist engagement and “sharing the love.” It was a marvel to be so close to Maddock as he worked his acoustic guitar through capo and tuning changes that puzzled my feeble brain.

Maddock also mingled with folks after the show, but all of the single women managed to beat me to his merch table, and I had to depart.

I left Staten Island a happy man. Should your travels take you to the New York area, be sure to check the schedule for the Hamilton House Park Concerts. It’s an experience you won’t regret. In fact, for me, it was one I chose over seeing The Who in Newark. Not only was it a few hundred dollars cheaper, these were shows where I really preferred to be. 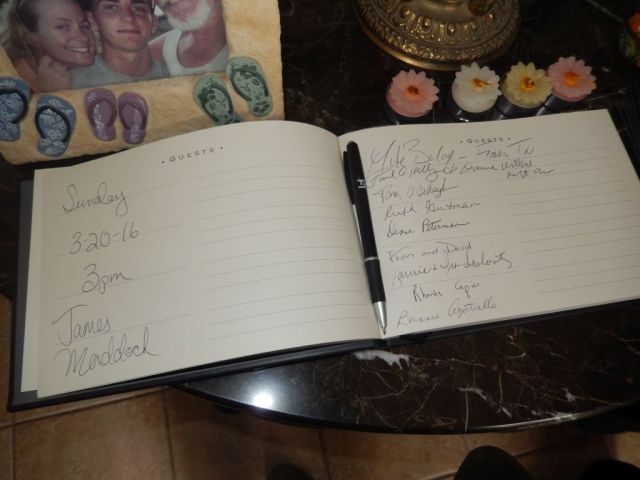