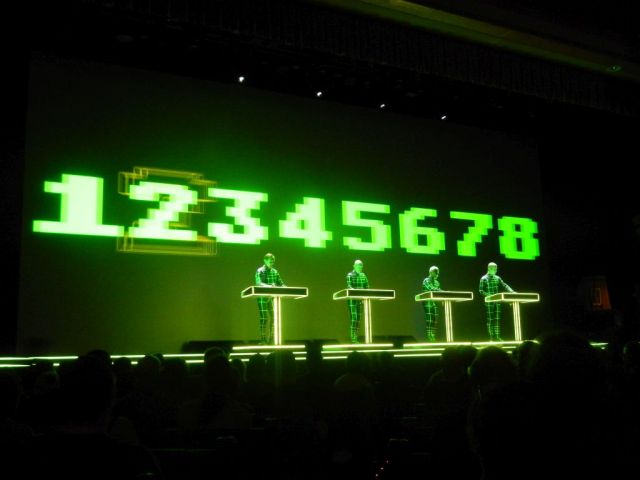 Despite the attempts of my millennial-generation son to influence me, I have never taking a liking to EDM (“Electronic Dance Music”). The enterprising and well-connected youngster even once comped me along with him to New York City’s Electric Zoo festival. There we saw genre superstar, Skrillex, perform “live” in front of some 80,000 crazed fans while riding atop a spaceship-like contraption. While I was at first interested, the repetitive sights and sounds fast became both boring and annoying. I also never got a sense of what he was actually doing. For all intents and purposes, he could have just been riding in his toy machine accompanied only by pre-recorded sounds and not doing anything else. It was not much in the way of entertainment.

So why then you ask, did I jump at the chance to see German electronic music pioneers, Kraftwerk, on a rare concert appearance at the Ryman?

Outside of the infrequency of their live performance and the curiosity of the 3D aspect, perhaps it was because they were from my generation. Back in the day, I often heard their infectious 1974 song, “Autobahn” on the FM dial. And compared to the current EDM artists, at least they sang, albeit briefly and often in German. 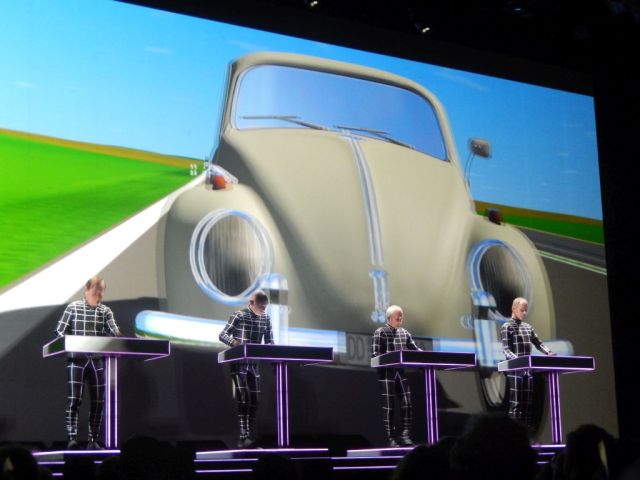 The initial fanfare about the Kraftwerk show was huge, and surprisingly it wound up only being an almost complete sellout. The crowd was also interestingly full of many of the local faces that I usually see at the hip Ryman shows. This was clearly the place to be this Sunday night in Nashville.

Upon entry to the Ryman, we all received a Kraftwerk-branded package containing our paper 3D glasses. The band also made a nice early start for a work night just 15 minutes after the posted 7pm time. (The show would end at 9:30.) 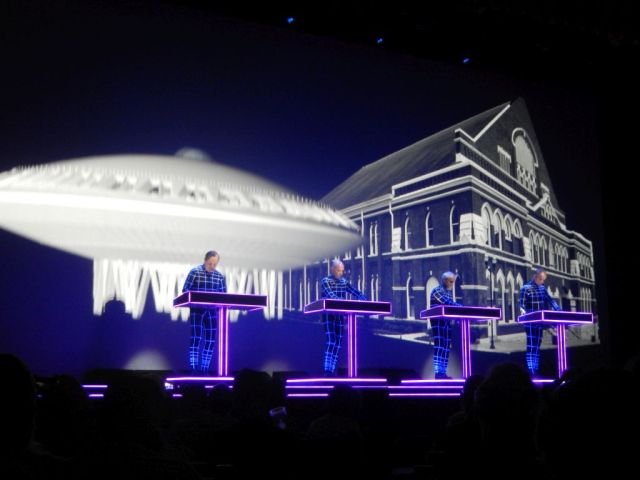 For the next two hours, I was totally fascinated. Let alone was the music diverse and varied enough to command my attention, on the full wall behind the band was a constant flow of brilliantly-designed, larger-than-life graphics. Customized to the theme of each song’s title, the visuals and accompanying 3D effects were incredible. One time a 3D flying saucer came right up to my face, only to later land next to an image of the Ryman. I often caught myself peeking out of my glasses to see what things looked like with just the naked eye to find that the visuals were fabulous-looking even without the added benefit of the 3D.

Although the current incarnation of Kraftwerk has been together for quite some time now, only their leader Ralf Hütter is an original founding member. And of the four that stood in front of identical workstations, he was the only one with a microphone therefore handling all the vocals. None of the four spoke a single word throughout the entire evening, let alone crack a smile or a grimace. Call it being in character or whatever, they stood emotionless and expressionless for the entire show adding to the drama.

But, much like my dig at Skrillex, like most attending the show, I had no clue what any one of them was doing. Aside from the fact that they appeared to be moving their hands to push buttons or slide levers, the joke going round was that were just checking their e-mail after pushing a start button! 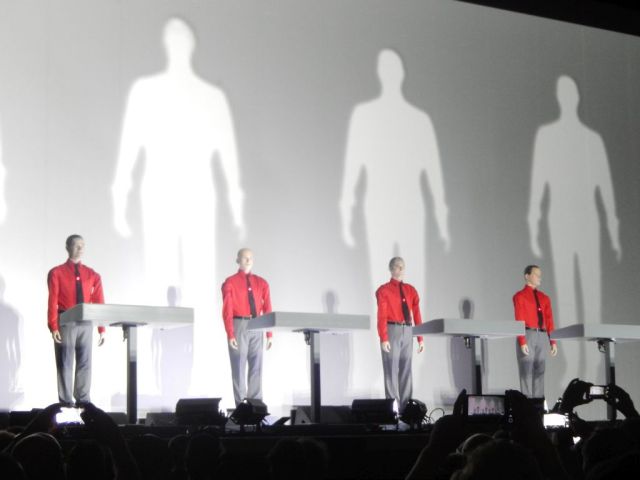 To further illustrate how the entire night could have just been on auto-pilot, for the first encore number, “The Robots,” the human foursome were replaced by you guessed it: robots of themselves. These animatronic creatures looked about as expressionless as their human models.

So what really won me over? The entire evening had me in a constant state of wondering what I would see or hear next. I applaud Kraftwerk for putting together something so uniquely unusual that it was hard to lose interest.

But, if 40 years ago you told me that one day I would be seeing Kraftwerk play “Autobahn” live in concert, I would have probably just laughed. Looking back, I am certainly glad that I did since this was one entertaining evening in Music City.