For almost 20 years, I followed Hamell on Trial’s every record. Never though was I in the right place at the right time to see (Ed) Hamell perform live. This night at Nashville’s best-sounding little room, I finally got the chance to see the mightiest one-man act in show business open for another solo performer, Murfreesboro’s Matt Mahaffey (sElf).

There are many labels used to describe Hamell’s genre–“anti-folk” seems to be one the most cited. I guess this fits for two reasons: (1) He plays an acoustic guitar louder than anyone else I have ever heard and (2) He often sings about what he is angry about. Should that sound in anyway unappealing, I strongly encourage you to not to let that scare you away. Hamell is simply one of the most intelligent, interesting and entertaining performers I have ever seen. 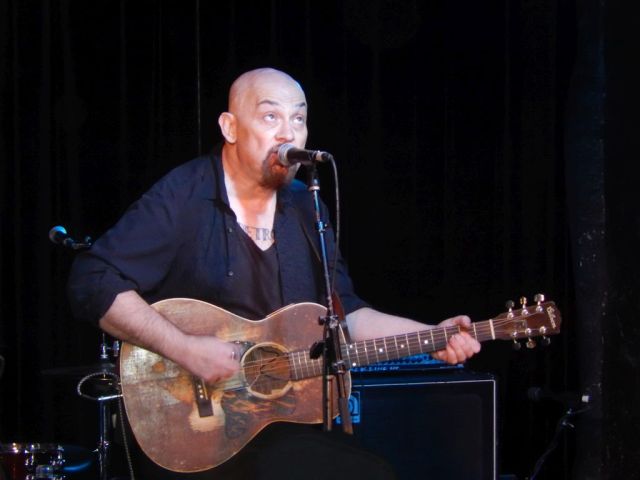 As expected, Hamell laced his brief 40-minute set with constant banter balanced between humor and opinion. His colorfully cinematic narrative-based songs are delivered through Hamell’s outpouring of words faster than seems humanly possible. Such words are guided by thundering acoustic guitar work on a poor old battered classic guitar that shows considerable wear from Hamell’s heavy-handed use.

Touring behind a new release on New West Records, satirically entitled The Happiest Man in the World, Hamell passionately played out his heart and soul despite the fact that the crowd numbered only 10. However, most were as eager to see him as was I, and in the dark of the Basement, our enthusiasm made it feel like a full house.

Meeting Ed after the show was a delight—there’s a big heart left behind after he releases all of his angst on stage. With New West moving to Nashville, Ed said he expects to be playing Music City again soon. My word to you is not to miss him—he is a special act that needs to be on everyone’s bucket list.

Tags: Hamell on Trial, The Basement