During my time living in Texas in the late 80s, I discovered new music from the pages of British weekly, New Musical Express. Most every Friday at lunchtime, I visited San Antonio’s Hogwild Records to pick up my NME, usually along with a generous selection of import singles that I discovered through its pages.

I first heard about Celtic punks, The Pogues, through the NME. My interest in them later peaked when Elvis Costello produced their second LP, Rum, Sodomy and the Lash. Costello found that gig to be a life-changer since he also wound up marrying their bass player, Cait O’Riordan, in the process.

Cait left the band soon after meeting EC, and in 1988, The Pogues released their career-defining LP, If I Should Fall From the Grace of God. On it was the song that remains my favorite rock Christmas song of all time, “Fairytale of New York.” Lead singer Shane MacGowan’s duets with the late Kirsty MacColl on this tragic but beautiful tale spun by MacGowan.  He is one of the rock world’s most brilliant but forever troubled songwriters.

MacGowan has a drinking problem so bad that I had never seen him sober–either on stage or in an interview. I recall once hearing that he took a “major” step towards recovery by switching to white wine to be easier on his liver. It’s really a sad story, and he currently falls into the “I didn’t know he was still alive category.” In and out of the band over the years, he is still listed as an active member although they have apparently announced their farewell shows.

After the band’s 1990 Saturday Night Live appearance, then “Weekend Update” anchor Dennis Miller remarked: “You know, I love the Pogues, but I’m a sucker for lyrics. Hey, what can I tell you?”

I felt the same way two years earlier after seeing the band touring in support of If I Should Fall From the Grace of God at Austin’s Liberty Lunch. It was musically stirring and exciting–a lively evening full of traditional Irish sounds given a fresh modern flair. But as for Shane’s lead vocals, they were nothing more than a drunken slur. It makes me think how great it might have been had he been sober and sounded at least half as good as he does on record. For me there was no rock and roll romance in seeing him this way. 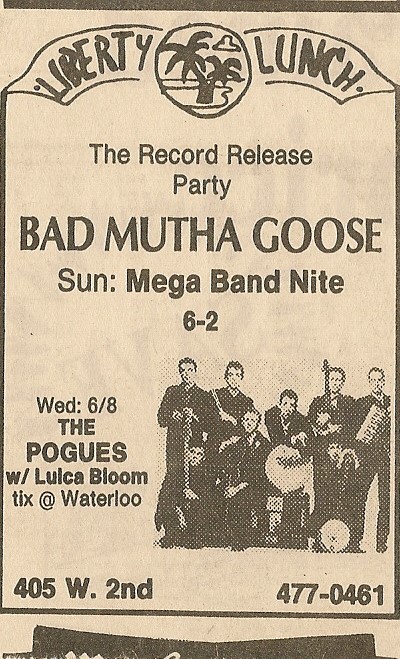 As for Liberty Lunch, this outdoor covered space over a concrete floor wasn’t much in the way of a theater. But in the 80s and 90s, this now shuttered space reigned as the top small venue in Austin. Some of the other acts I saw there during my Texas years include Joe Ely, Rank and File, John Hiatt, Nick Lowe, Billy Bragg and Paul Westerberg.