If there is currently any performing singer-songwriter that deserves to be called an American Treasure, it is John Prine. With a recording career that started back in 1971 when he was called one of the “New Dylans,” Prine has created a legacy of songs that range from the poignantly sensitive “Hello in There” to the outrageously funny “Please Don’t Bury Me.” The world is a better place with John Prine, and we are all blessed that he is still out there performing.

Just a few years ago, Prine survived a bout with cancer in his neck, coming away with a voice an octave or two lower and a changed facial appearance. The 67-year old artist just recently announced that he will be rescheduling some tour dates to deal with cancer again—this time a form of operable lung cancer that thankfully was caught early.

Though he’s no longer songwriting-prolific (his last release was 2005’s Fair and Square), Prine seems to be following in the footsteps of Dylan in that he, too, seems to be on a “never-ending” tour. Following a pattern over the last few years with short stints of a few dates here and there, this night concluded a two-night stand at the Ryman. The Friday night opener was Leon Redbone, but I chose tonight’s show which featured support from the incomparable Steve Earle and the Dukes.

I have been a long follower of Prine and his music, and he is among a select few that I have now seen perform in five decades. Prine’s shows are always special in that they are surprisingly lengthy (this one topped two hours). He never fails to play the songs his fans want to hear. In fact, I left fully satisfied just shy of getting to hear “Illegal Smile.” There was even the rare treat tonight of hearing Prine cover two other great songwriters: Bob Dylan and the late Townes Van Zandt.

The post-cancer Prine is no doubt a different singer than he once was, but he has found a comfortable range for his voice that manages to deliver the goods just fine. This night, the simple countrified sound from his usual trio was supported by Nashville friend and guitar wizard Pat McLaughlin as a special Ryman guest. The show, however, ultimately ended with a full stage of musicians with Earle and his Dukes on stage for the final two encore numbers. 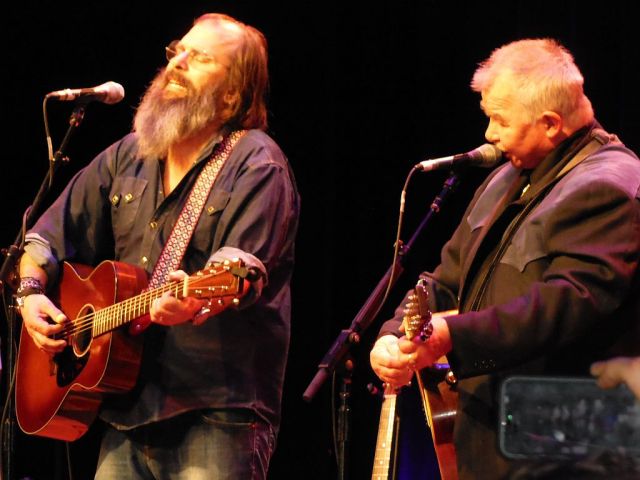 Prine took the time tonight to dedicate songs to his friends Nanci Griffith, Bonnie Raitt and the late Steve Goodman. For me, it was truly an honor to be in the same room with an artist as humble and respected as John Prine.