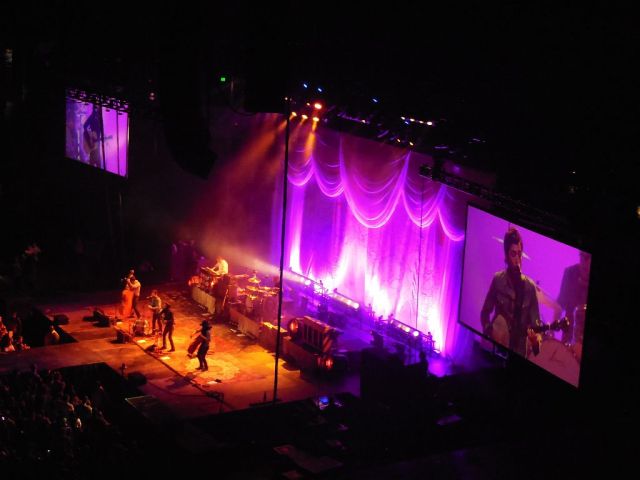 Even though they had already played the Bridgestone Arena to a packed house back in October 2011, it is still quite surprising to me that North Carolina’s Avett Brothers have a big enough local fan base to play a venue this size. The sold-out audience of about 15,000 fans filled the place. (The upper nose-bleed seats were shut down for the event.) In contrast to their first appearance at the Arena which had some sound issues, the boys really showed that they know how to work a big room and make it sound, look, and feel great.

The common word used to describe the Avett’s performance was energetic. Their rapid-fire 26-song, two-hour set saw them in motion most of the evening. The four full-time band members jumped and ran about the large Arena stage that included a short runway extension into the front standing section of the crowd. Perhaps their energy comes from their punk attitude which they referenced when Scott Avett said that they tried to make “Distraction #74” sound like the Beastie Boys. The Avetts have only one degree of separation from the Beasties through Rick Rubin who produced the Avett’s last two records and The Beasties’ pivotal Licensed to Ill record.

For some time now, the writing and singing brothers, Seth and Scott, long-time member and bassist, Bob Crawford, and the newest full-time member, cellist Joe Kwon, have expanded their quartet to include full-time piano and drum support. Together, they create a fuller sound that doesn’t take away from the pureness of their down-home Americana sound, but adds a deeper bottom that enhances their sound in the big rooms.

The Avett’s energy level took a pause mid-show and went intimate with Seth’s solo under a spotlight on the runway for a rendition of a gospel song “Stand by Me” popularized by Ernest Tubb. Then, as soon as he played his last note, the light moved to the center of the arena behind the soundboard where Scott took his turn alone with “Idumea,” a song by the eccentric English songwriter Patrick Wolf, accompanied only by Kwon’s cello.  Both moments were tender and touching.

The wildness then resumed and after closing the main set with their ode to Brooklyn, “I and Love and You,” the three original members returned to the runway for a heartfelt “Just a Closer Walk with Thee,” a gospel hymn that Tennessee Ernie Ford took to the country charts in the late 1950s.

A common thread of discussion after the show was how great it would be to see these guys in a small room. Well folks, I’m sorry, but that day is done. I doubt that the legion of fans captured by the beauty of the Avett’s songs and exhilarating live performances will be giving up on this band anytime soon.